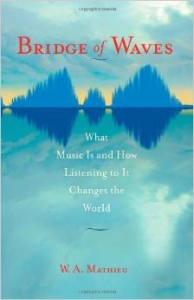 I’ve contemplated starting a book club for quite some time, but I never had a book scream to be shared with others chapter-by-chapter right from the beginning until now. By the end of the introduction to W.A. Mathieu’s Bridge of Waves: What Music Is and How Listening to It Changes the World, I knew I wanted to take the time to reflect deeply and share openly. Musicality is one of my absolute favorite topics of discussion, and Mathieu’s book promises to provide great fuel for this fire.

So in two weeks, starting Tuesday, March 1, I will be “hosting” a Bridge of Waves book club on Joy in Motion every Tuesday. Feel free to post responses or your own thoughts in the Comments of each post so we can have an engaging discussion. If you are a blogger, you are welcome to post a link to your own blog post related to the chapter for that week, and everyone can respond to all posts through the comments on the respective sites. And of course anyone can read the book and follow along with the weekly posts without any obligation to participate unless they feel drawn to.

Since we have two weeks until the official start of the book club, you have time to order the book through Amazon or Barnes & Noble and start reading. The first post on March 1 will explore some of the concepts found in the book’s introduction (and keep reading below for a sneak peek!). From there we will read a chapter a week (for a total of ten weeks/chapters) and post every Tuesday. To get you excited about what’s to come, here are the chapter titles:

1. Music as Body
2. Music as Mind
3. Music as Heart
4. Feeling Mind, Thinking Heart
5. Music as Life
6. Music as Story
7. Music as Mirror
8. Music on the Zen Elevator
9. The Enlightened Listener
10. Living the Waves

You wouldn’t believe the self control required to have this book sitting on my nightstand and not read ahead! But I am so excited about exploring this book with friends old and new. I hope you will join me, or at least follow along. If now is not a good time, I encourage you to put this book on your reading list for sometime in the future.

Finally, to give you a taste of what to expect in the coming weeks, below is my first reflection on this book based on part of the introduction. On March 1, I will explore another concept from the introduction that I have been wanting to write about for a while. And not only does Mathieu articulate this idea quite beautifully, he also reveals the meaning behind the title of the book! So stay tuned and get ready for our official start on March 1, but until then here’s where we begin. Enjoy!

Name vs. Nameless, Wonder vs. Why…

The introduction begins with Mathieu seated at a piano bench in a small concert hall, about to begin a completely improvised performance. From the blank canvas of his mind, with no preconceptions, he sounds the first note. The moment this first note becomes reality, and even before, something magical happens:

Then, as a familiar sky lights up in my skull, the tone extends into a gold ribbon leading to an inner horizon where an ocean of the waves called music begins to surge in all directions.

Where has that first note come from?

Although he is speaking of music, his words could also be written about the beginning of a dance – tango, perhaps, but just as easily salsa or swing or waltz. In addition to the hearing of the first note, in dance we have the taking of the first step. Or maybe not even that much. Maybe just the first breath and slight sway barely visible to the observer. The moment we first connect – or don’t – with our partner and the music opens up limitless possibility.

Mathieu goes on to reflect on a common point of discussion, debate, and struggle among and between dancers: the unity and tension between technique and structure on the one hand, and connection and expression on the other:

I did fortunately begin to recognize that naming something is different from hearing it, just as surely as reading the menu is not eating the dinner. Though I wish I’d had more guidance, I did gradually learn that there is a time for the name and a time for the nameless . . . Since I’m a teacher and a writer as well as a composer of written music, I have learned to name just about anything nameable in music; at the same time I’ve had to develop strategies for dwelling long and clear in the nameless intuitive.

Yes, we do love our labels. Especially in dance, we always want to know what the step is called, where our feet and hands are supposed to go, how long and how much. In a tango musicality intensive I attended earlier this year, instructor Alex Krebs told of a student in a previous class who asked “How long do you pause for?” in reference to a pause in between movements. Another student in the class shouted out, “How long do you kiss someone for?” In the end, there is no absolute rule for the movement and the stillness; each should come from feeling and not from formula.

A musician friend explored this same concept in his Christian faith and beautifully phrased it as a question of ”Wonder v. Why”:

I remember sitting in a Philosophy class during the time this song was emerging.  I was so inspired through the questions my professor was asking that I thought about changing my major and diving fully into them myself in a more academic manner.  Somewhere in that process I realized that while I enjoy asking the questions, I equally enjoy reaching the point where I run out of answers, into mystery, and ultimately, onto worship… After all, in the ever-present battle between wonder and why, wonder always wins.

Sometimes we need to be reminded that while labels, rules, limits, and structure light the path, they are not the path itself. Which is where we get this idea of learning the rules until we forget we know them (see Finding Flow on the Dance Floor, Part 1: Social Dance as Sport for more on this concept). This isn’t to say that technique is unimportant, as is often argued in dance discussions. On the contrary, technique is not discarded but rather internalized and transcended. Far from being opposing ideas, in actuality freedom and limits – the wonder and the why – are inseparable. Mathieu comes to the same conclusion:

It turns out that first note I play (which is about to let loose thousands more) is named G-sharp, although I know this only later, in hindsight. At the moment I play the G-sharp, I know its name only in the way we know the spelling of words as we speak them.

I love this concept of braiding two seemingly opposing ideas. Dance for me is unity through opposites: movement and stillness, intellect and emotion, connection and solitude, absorption and relaxation, transcendence and groundedness. The struggle to define as “either-or” closes us off from the opportunity to feel the truth and beauty of “both-and”. When we find peaceful co-existence between opposites, we arrive at a fuller and richer experience of what the music and the dance have to offer us.

Here’s the next post in this series:
Musicality Book Club, Week 1: Grounded Spirituality Through Upper and Lower Body

2 comments on Wonder vs. Why: The Bridge of Waves Book Club for Musically Curious Dancers