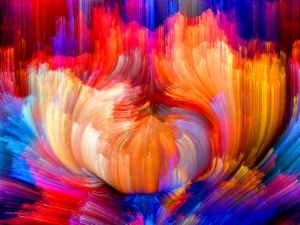 One of the first classes I signed up for in college was Music Appreciation, and my professor was truly a gifted teacher. Every week he would bring his large collection of instruments to class and use them to demonstrate musical concepts that would have been abstract and disembodied otherwise. Words like timbre and tempo, major and minor, chord and cadence, transformed from terms with lifeless definitions to sensory experiences that I could see, hear, and feel.

One day, my music professor played short sections of two different melodies on the piano, then played a recording of the following classical music piece by J.S. Bach to explain polyphony, a musical texture in which these two different melodies play at the same time in relationship to each other. Take a listen:

The two melodies I first heard played as independent entities now intersected in time, their pitches and rhythms departing and colliding again, flirting with each other in a delicate dance, each making greater sense of the other. Following their relationship with each other in the flow of time was an intellectual puzzle, a physical sensation, and an emotional journey, and it was made possible by texture.

Texture is a quality that we perceive in our everyday lives. We experience texture in our sense of touch, from telling the difference between sandpaper and ice to feeling the clothing on our body or the skin of a loved one when we give them a hand massage. We also sense texture visually in both natural landscapes and man-made objects, including works of art. The image at the beginning of this article is an excellent example: The “brushstrokes” lend this digital painting a thick texture, and the colors – where and how they are used – give that texture a specific character.

In music, texture refers to how many instruments (the human voice included) are sounding at any one time and how they are interacting with each other. Texture is what the Oxford Companion to Music calls “the vertical build of the music – the relationship between its simultaneously sounding parts.” A singer accompanied by a piano, for example, will create a thinner texture than a full ten-piece band. But texture also changes throughout each song, often building from beginning to end and from verse to chorus, ebbing and flowing to create movement and interest.

The opening up of the groove in Marvin Gaye’s classic song, I Heard It Through the Grapevine, is an excellent example. The songs starts with a simple layer, with additional layers being added one at a time (at 0:05, 0:10, and 0:14) to create a thickly textured groove. Marvin Gaye (who comes in at 0:20), the strong backbeat (0:22), and the background singers (0:39) add more layers to the texture of the song. The relationships between these various layers makes it interesting to listen to.

Another excellent example of a song in which the texture builds from the beginning is La Muerte by El Gran Combo de Puerto Rico, which I shared the texture changes for in my article Groovology 101: Groove in Music and Dance.

When listening for texture, it can be helpful to think of each instrument as a character. The texture of the music is the sound of the characters interacting from moment to moment. In strictly musical terms we might talk about whether the instruments are playing the same, complementary, or contrasting in their pitch, intensity, and rhythm. But if we imagine the instruments as characters, we can talk about which one plays the starring role, which ones play supporting roles, and how they relate to each other. The way the characters in music act and interact over time brings about story, and story is another way we can understand how changes in texture throughout the song make music so exciting.

Let’s continue with this analogy and imagine that listening to texture in a song is like watching a movie, and listening or moving to a particular instrument in the song’s texture is like entering the movie as an actor playing a specific character. We still experience the entire movie, but we experience the story (including the other characters) from the point of view of the character we play. If we were to play a different character, the story would be experienced differently, even though the movie is the same.

This is similar to what I wrote in The Creative Element of Musicality about the Necker cube (see picture at right): In the same way that we can see the exact same cube in two different ways (by focusing on the bottom left corner as the front face of the cube or on the top right corner as the front face), we can hear the same song in many different ways by changing which character we focus on, which changes how we enter the texture and therefore how it is organized in our perception and felt in our body.

But while the Necker cube is a one-dimensional object with just two different ways to see it, pieces of music are – in the words of ethnomusicologist Paul Berliner – “multidimensional sound sculptures,” with many different ways of experiencing its texture. This is what made listening to Bach’s Organ Fugue in G Minor so engaging for me, and what makes good dance music so endlessly exciting for us to move to.

When we dance to a song we almost never move to the same instrument the entire time, which means we are already engaging with musical texture through different characters. We also frequently move in and out of sync with our partner, aiming to move perfectly together in one moment and moving independently but complementary to each other in the next moment. So on a basic level texture is present in our dance from the very beginning. Further exploring these possibilities by applying our creativity and emotion to musical texture through our movement is part of the art of our dance.

Musical texture is a helpful concept, but it takes practice to change how much you hear, feel, and move to the music, both on your own and with a partner. Here are some simple exercises you can do to improve your practical understanding of musical texture:

1.  Listening: Select a piece of music you enjoy and make a list of all the instruments you can identify in the song. Then go through the list one at a time (starting with the most prominent instrument and working your way towards the least prominent) and for each instrument play the song and listen specifically for that instrument. Pay attention to where it shows up and where it drops out, where it gets louder or softer, what rhythm it’s playing and when it slows down or speeds up, and how these changes affect the way you hear the other instruments. Pay attention not only to what you are hearing but to how it makes you feel. After you’ve listened for each instrument, play the song five more times, listening to the overall feel of the song. Does it sound different now? What do you notice now that you didn’t notice before?

3.  Moving: Repeat the listening exercise (#1 above), but this time move to the instrument you are listening to each time. It doesn’t have to be any particular form of movement, just something to indicate that you are hearing that instrument. For the last five listens to the overall feel of the song, move throughout the song to whatever instrument you feel like, but try to move to each instrument at least once during the song. As you get more comfortable, you can try moving with vocabulary from your dance form.

4.  Partnering: While practicing a pattern or just practicing improvising with a partner, repeat the pattern or the song three times for each of the following: 1) Focus on your partner and what they are moving to in the music, both the rhythm and the feeling of how they are moving. 2) Focus on your own movement and how it relates to the music, both the rhythm and the feeling of how you are moving. 3) Focus on your partnership, on how the rhythm and feeling of both your movements relate to each other. This is exercise #2 above applied to your own social dancing. The point of this exercise is to bring greater awareness to the musical layers you are currently dancing to and other layers you could explore more.
Bonus exercise: Select a song you enjoy and dance to it once with your practice partner. Then do either the listening exercise (#1 above) or the moving exercise (#3) together and afterward dance to the song again. Discuss which layers you dance to the most and which ones tend to get left out. Experiment with ways of dancing those neglected layers.