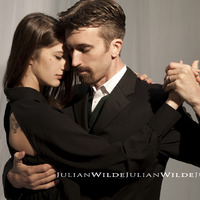 Alex Krebs is an Argentine tango dancer, teacher, and performer based in Portland, Oregon. He has taught and performed throughout the United States and Europe and now owns the studio Tango Berretín in Portland. He is especially known for his focus on musicality. Alex has a Bachelor’s degree in music and physics from Reed College and has been a musician for most of his life. In 2002, he started playing the bandoneón, the challenging accordion-like instrument that gives the tango its distinctive sound. He is also the director of Conjunto Berretín, a tango orchestra that plays at local festivals and events.

At Portland’s Tangofest in October of 2008, I sat down with Alex in the Tiffany Center ballroom in downtown Portland before Conjunto Berretín’s rehearsal for the Grande Ball. I was especially interested in Alex’s perspective on the concepts of musicality, connection, and flow in Argentine tango based on his unique background and experiences. As we began talking, I formed the impression that Alex is analytical and thoughtful while communicating a great passion for the dance and the music that inspires it. Here is a summary of what were for me the “highlights” of our interview. You can read the complete transcribed interview here.

The Journey: “I had to become more part of the music.”

Alex’s attraction to Argentine tango came first as a result of the music. After his first year of college, he started listening to the music of Carlos Gardel and was immediately hooked. Shortly thereafter, he was exposed to the dance during a summer in San Francisco. After studying tango there for three months, he joined the tango community in Portland and decided to spend the next summer in Buenos Aires, the birthplace of tango. His days in Argentina consisted of tango classes and all-night milongas, dancing up to ten hours a day. During this learning process, Alex found a greater fulfillment of the music in the arms of the dance: “Dancing was a way of getting into the music more . . . Just listening to the music wasn’t enough. I had to become more part of the music.”

Upon his return to Portland, Alex’s immersion experience in the tango’s capital proved to have brought his ability and knowledge to a new level. He started receiving requests for classes and private lessons and began a práctica at Reed College. Though he never considered teaching tango before, he had found himself drawn to teaching roles throughout his life. Teaching tango started to feel like a natural fit. After graduation, he returned to Buenos Aires for three months to study different styles and ways of looking at the dance. His teaching roles continued to expand into different areas upon his return, and two years later he bought the studio Tango Berretín and started receiving invitations to teach across the United States and Europe.

In 2002, Alex’s exploration of tango would take him back to where his journey had started: the music. While DJing at a milonga in San Francisco, Alex was given a bandoneón by a local tanguera and immediately immersed himself in the instrument, practicing one to two hours a day. Gradually, he was joined by other musicians who shared a passion for playing tango music. They would gather at the Saturday market to play and, after adding enough musicians for a six-piece tango orchestra, began to receive requests to play at local events. Conjunto Berretín continues to play locally and is joined twice a year by outside musicians to form a ten-piece orchestra for Portland’s ValenTango and TangoFest events. The orchestra has also released two CDs, Tango for Lovers and Fools and Tangamente: Tangos a la parilla para bailar.

Musicality: “It’s the way the whole body reacts to the music.”

As a tango instructor with such an extensive background in the music, how does Alex define musicality? “It starts with the ear, the ability to hear what’s in the music,” says Alex. Just being able to hear the basic rhythm in Argentine tango is important, but there is also a lot of accenting and syncopation in the music that the dancer must learn to hear and understand. Alex points out that Argentine tango today is danced mostly to recordings, which means that musicality has come to be defined as the ability to memorize and dance to the musical elements – the rhythm, the instrumentation, the melody – in these songs. So becoming familiar with all aspects of the music is very important.

But hearing and understanding the music are only the first part. “The second part to that,” says Alex, “is execution and filtering and choosing, because it’s impossible to dance everything in the music.” Beginners, he notes, dance primarily in the rhythmic style because they are not familiar with the melody and other instrumentation in a particular song. As dancers become more musical, they are able to dance to the melody more and can pick and choose from a variety of instruments in a song. This only happens when the dancer becomes intimately familiar with the recorded music and learns to dance to the music, not on top of it. However, says Alex, the increasing popularity of live music by orchestras such as Conjunto Berretín may change how musicality is defined in Argentine tango in the coming decades.

Though hearing and executing are the two major components of musicality, most people recognize that there is a deeper and more intangible aspect of being a musical dancer. Alex recognizes this quality and believes it plays a major role in the dance. “Part of being musical is not just putting the music into your feet and your legs. There’s what the Argentines call cadencia, which is the twisting and lilting. It’s the way the whole body reacts to the music. The whole body is sort of a musical palette rather than just the feet or legs, which tend to be the major emphasis in tango.” If hearing and executing are the height and width of musicality, this quality of cadencia is the depth, the third dimension that makes a dancer truly musical.

Connection and Flow: “You have to learn to feel.”

Developing this musicality, says Alex, is one way to create a connection with another person on the dance floor. The concept of connection is often talked about in socially improvised partner dancing, and in Argentine tango in particular, but it is a very elusive concept to define. To Alex, connection can happen on many different levels. Some dances are about the music, while others are about combining steps in a creative way that becomes a challenge for both partners. And then there are transcendental dances, says Alex, “in which almost nothing exists except you and your partner. Even the music doesn’t really exist . . . You just sort of float together and forget that you’re leading and following, and it’s just two bodies moving as one.” There are many types of connection that are possible between two people on the dance floor. But, says Alex, it is important that both partners are dancing with each other for the same reason, whether it is the music or the feeling of transcendence. It is only when both are focused on the same goal in the dance that they are able to feel this deeper connection with each other.

Connection on some level with your partner is also necessary to experience flow, that feeling of being “on a high” or “in the zone.” Alex likens it to meditation, and indeed other tango dancers have made the comparison between tango and a Zen-like or meditative state. Alex himself still remembers the first time he experienced that feeling of transcendence and flow in tango. “It’s a place where there’s no doubt, there’s no questions, there’s no insecurity . . . They say tango is an anxious quest for freedom. It’s when you dance with someone and it feels like you have the same freedom of movement and expressivity as if you’re dancing by yourself, but you’re sharing it with someone.”

So how can dancers cultivate this feeling of flow? Alex believes there is no shortcut. As with any other sport or art, a dancer has to master the technique and allow the steps to become muscle memory through repetition. These are the only ways to truly internalize the tango so as to dance “without intellectualizing.” Though many beginners would like to skip the basics and move on to more exciting and advanced concepts, Alex emphasizes that there is a logical progression that is important when learning. It is essential to develop the basic technique through lots of practice before you can move on to the intermediate and advanced concepts, or even develop connection with a partner. “Consistency is the word,” says Alex. “When dancing with another person you always have to adjust, but . . . you have to give your dance consistency so that the other connections can come through.”

So technique and repetition are important in order to build connection in the dance and experience flow with another person. However, the emphasis on technique and repetition does not mean that you have to abandon fun and creativity in the learning process. On the contrary, as an instructor Alex recommends that his students don’t try to just memorize steps, or even just lead and follow, but to feel something when you move: “Don’t just do the step because it’s the step. You have to learn to feel . . . I recommend dancing on your own and then when you get with your partner sort of bring back that spirit of how you would dance in your kitchen alone if you put on tango music . . . Because this dance is about how it feels, not how it looks. If it feels good and you move well, it’s going to look good. And the elegance comes more from a connected movement than from a pose or a certain line you’re creating.”

That phrase comes pretty close to capturing my impression of Alex’s exploration of and devotion to Argentine tango. From his connection to music early in life to his exploration of the dance and the art of teaching to his study of the music through the bandoneón and the Conjunto, Alex’s tango journey appears as a connected movement with a certain amount of elegance to it. And the journey continues: “It is still very engaging for me. Finding new possibilities, or watching someone dance and being inspired. There are so many different ways to dance this dance. Just when you’ve sort of figured one way out, there are a hundred other ways to do it, to try on different suits . . . It keeps me very engaged on many different levels.”

For more information on Alex Krebs, visit his website here.